Chicago and the surprises

Arrived to Chicago after 10 pm so looked around the terminal, unsuccessfully called the hotel service that was suggested by the airline and was promised to get the lowest rate available. Than found a quiet corner to sleep. A man in the uniform of the airport passed by and asked whether I plan to spend overnight there. I answered positively and asked if it a problem is. His replay was: 'Nice shoes, nice bag... Take care.' So I put my nice shoes into my nice backpack to reduce the risk info half.:) And was starting to set myself into a confortable position when the man returned carrying a camping bed. For me! Surprise #1.

(I have to admit that I am strangely affected by sleeping in unusual places: in an abandoned stone mine; in a cave 100ms below the surface; under the sky without tent; in a tent in snow; in a bivaque hut planned to use only in case of emergency; alone in a dormitory of 20; with 19 other person in a dorm of 20; in the meeting room of the office; in the Chicago airport on a camping bed.)

Without visa I did not expect to be let out of the transit area and enter the US. But I was allowed. Surprise #2.

So I get up early, that was supported by the man requesting back his camping bed shortly after 5 am, and set off for the city center.

It was freezing cold. Or I was just not used to this temperature in this season.:) The display showed 11 degree and most probably in Fahrenheit.

Without directly seeking for it or even was very sure that it is in this city I was able to find the Cloud Gate. Surprise #3.

Given that my set of clothes was not optimized for this temperature after a bit more than an hour spending in the city I returned to the airport.

Ps: The US definitely has the feature that everybody speaks English so even the simplest people could understand your question. 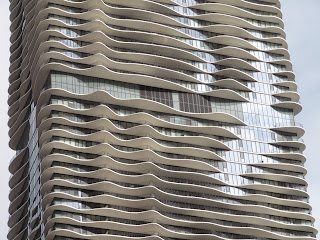 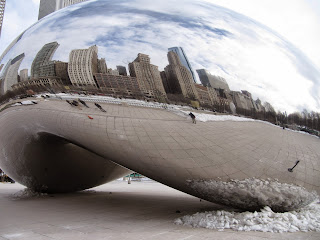