Monte Alban and the grasshoppers

Today we visited an other archeological place called Monte Alban.

After that we were strolling in the local market buying foods and trying things that we (er, me) had not tried before. Eg. fried grasshoppers. That was delicious:) though a bit spicy for me. 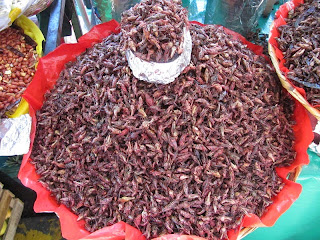 I just realised how big and diverse Mexico is. Not only the traditional costumes change almost city by city. Also the fauna differs. Here the landscape rather savanna-like with lots of types of cactuses as opposed to the lush rainforests that dominated before.

Tuc-tucs (a 3-wheeled vehicle with an engine in the front and seats for two passengers behind the driver) appeared as a kind of alternative of the tricycles that carried a big basket on them front wheels that is used for carrying different stuff even peoples.

More photos
Posted by aniko.camino at 23:37