I realised that my affection toward a town highly depends on the peoples I come across.
I really like Queretaro. People I meet are relaxed and kind and helpful and usually enthusiastic about communicating with me in Spanish.
I had a nice conversation with Ana, a Mexican lady, who is from Mexico DF but moved to Querétaro many-many years ago and now directs an organization that gives work for 16 disabled people, who bake delicious cakes. 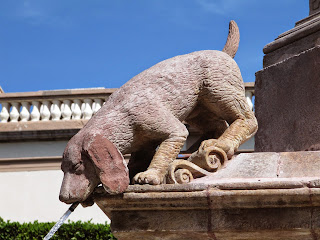 Today I ate some tortilla-like thing that has blueish grey color, that seemed to be artificially coloured for me. But it turned out that the black corn causes this strange color. (If I had understood the explanation well.)
In Mexico they have 4 type / colour of corns: yellow, white, red and black. From the red one they make orange tortillas. 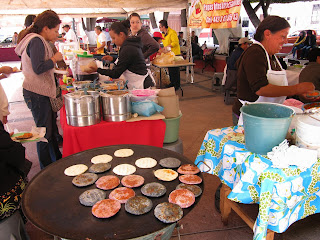 The public transportation (buses) represents both end of the scale from worn-out till super posh and modern. On the first class bus you have your own display with numerous movies to choose from (in Spanish, of course:)), headset, 2 toilets (one for men and one for women), air-conditioning and plush pad for your feet. But eg. some of the local buses (called 'taxibus') Queretaro or the 2nd (3rd, 4th?) class coaches are really worn out with several dents, sometimes stopping engines, dirty curtains rich in holes or the most simple blinders: The upper part of the windshield and the windows are sprayed black.

Ah, I have almost forgotten about the most thrilling experience of the day: Is it real or only my imagination that the music of the film in the 'Museo de la Casa de la Zacatecana' is an adaptation of a Hungarian folk song and contains parts like: 'Szakajt egyet róla' or 'Túrót eszik a cigány'? Hungarian speakers around, could you please confirm it or disappoint me?

You might noticed that this post is a bit longer than the former ones. It is because I am writing it on a bus toward Mexico DF, where I have time. I just realised that people here use them smartphones, tablets, notebooks or all the three in the same time (I really have seen such) without having feet of being robbed. Just to do as the locals do I have starts to follow the examples.