Bosque de Chapiltepec and the metro

On the day of my departure I planned to visit the Bosque de Chapultepec, that is a big park (or forest as its name states) with two lakes, a little hill with a castle housing the Museo Nacional de Antropología. And cheeky squirrels. 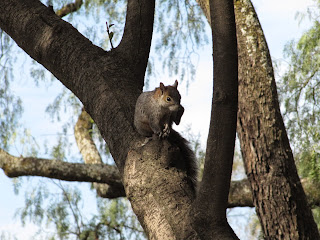 Travelling on the metro in Mexico City is quite entertaining. There are some 'program' all the time.

Almost in each stop gets on somebody selling more or less useful things like: snacks, headsets, creams, led lamps, hair gums. Or selling music cd with a hangfal demonstrate them or begging with singing songs. I guess the later ones got money just to stop.

...But maybe after a week these events are rather annoying to entertaining.

Also a good feature that in the rush hours there are some carriage (and also a section on the peron) where only women and children are allowed to enter. Despite of if there was such a crowd at some morning that the metros was not able to take in all of the people for at least 15 minutes so at the end I chose to walk.

More photos
Posted by aniko.camino at 06:30