I have started to select and upload my photos. Here you can find the already uploaded ones (grouped by days).
Uploading the "whole Camino" might take several weeks, so please be patient.
Posted by aniko.camino at 11:27 No comments:

Maybe I have found the most exciting place in Barcelona: the market. Most precisely the ´Mercat Boqueria´. It is full of fresh sea creatures (I would not call them seafood, as I would not eat them in the very state. Some of them were even moving!), fruits that I have never seen, fresh juices, dried fruits, etc... 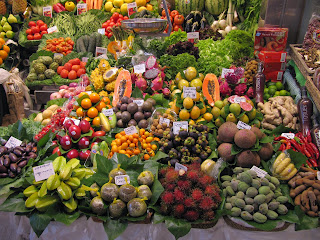 Successfully arrived to Barcelona. I have to wait a half an hour to check in but till then I am allowed to use the common area including the Internet. So I am using the opportunity. :) So long so good. :)
I like Catalonia (Catalunya) as they have the same letter, ´ny´, that I have in my name and pronounce in the same way! Ergo they can pronounce my name correctly. Hurray!

Posted by aniko.camino at 12:08 No comments:

The worst weather during the whole Camino Frances, but we took the last kms joking with friends. Arriving. Big hugs. Champagne. Emotions. Pilgrim mass. Going to the albergue. Having lunch with Camino-friends. Collecting the credential. Happiness, tiredness.

The hospitaleo in the very first albergue said, that the Camino is only the first step, the Way begins after returning home. Will see. For me there is a walk to the end of the World (as Finisterra was thought to be in the middle ages) before. 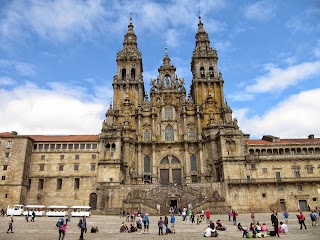 One day (on 6th June, indeed:)) I was going in the hills on a nice path folded by trees. At one point there was an advertisement about some ´crystal galery´ and ´art exhibition´. It was 500m away from the Camino track. I had time and was curious about it so I followed its signs. I ended up by a house built of slate, that was typical for that area.

Inside the house there was several pictures made by an interesting technique: The artist collected stones, minerals and crystals from different edges of the world, crashed them into sand and ´painted´ beautiful and exciting pictures by pouring these crystal-powder using them natural colours. (It is a bit difficult to describe, there will be photos after my returning to home.)

The ´galery´ was in the wide corridor of the 1st floor where the rooms opened. The doors were open so that I could look into the working room of the artist, that created a kind of familiar atmosphere.

There was a tiny, cosy chapel attached to the house. I asked the artist about his religion because both in his pictures and the decoration of the chapel appeared both christian and oriental motives. He said that he did not follow any religions but got what he found to be useful from each of them. He did meditation and yoga and felt that connecting to the transcendence (might not be the right word) does not requires any of the religions.

There are experiences that are so intensive and touching that you are not aware of time For me getting to know the artist and his pictures was one of them. I have always wristwatch with me but I do not know how much time I spent there. This experience stays in my mind and made it busy for days.

Out of hundreds and hundreds of pilgrims that pass by the advertisement only 2 to 10 spend the time and energy to take the extra 1 km and visit the artist, look at his crystal pictures and change ideas with an extraordinary man.

(One more thing: We ware speaking in Spanish so I am really proud of my 24-lesson-deep Spanish knowledge. :))

What was on the icing on the cake: On the very same day I eat first in my life octopus (´pulpo´ in Spanish) on the marketplace of Sarria among local peoples and with live music of Gallician pipe. (I am not sure of the name of the instrument...)

Update: In the meantime I have uploaded the photos. But, unfortunately, they reflects nothing about the atmosphere. 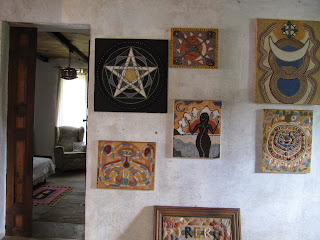 Posted by aniko.camino at 15:49 No comments:

Yesterday I saw a sweet little dragon. It must be a dragon as it was too huge to be a lizard...

The landscape is still picturesque but differs from the one there was at the beginning. Now there are bushes in bright rosa, yellow and white colours. There were also parcels of vineyards with organised lines of vine.

Time after time I met the same group of peoples: eg. 'the four Musketeers' (Gary from England, Klaus from Austria, Bart and Jean from Belgium), Kathie (US, California), Michael (complicated: Japan & US & Spain) and friends, and a Slovakian climber girl: Petra. And now I tend to search for them and stay in the same albergue.
There was time in my Camino when I intentionally not stayed in the cities / villages the book of John Brierley offers to avoid the ´crowd´. But for now I realised that the cities he suggest is really worth to see. I mean see without backpack. :) So right now I also follow the stages the ´orange book´ offers.

Now we are enough close to Santiago that the pilgrims who has only one weak for the Camino appear. At least according to the guide book. Till now I have not sensed too much from it. 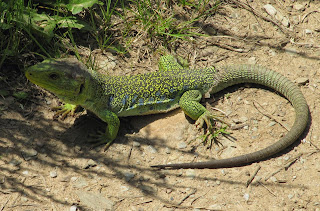 Posted by aniko.camino at 16:45 No comments:

Astorga is my favourite city till now.

It has chocolate a museum and a Gaudi building. Should I say more? :) 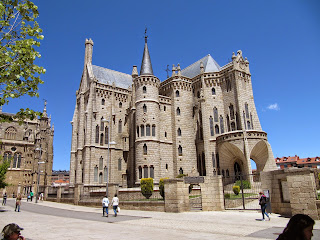 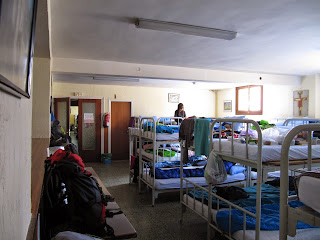 Posted by aniko.camino at 19:31 No comments:

Once when I passed by a farmer, who was arranging something around his car, without greeting me or saying anything he put a peach into my hand.

A cheerful Italian coupe, who were wearing them socks on them hands not having glows, were playing "puppet show" to the pilgrims they passed by.
A priest were standing in the chilling cold on early morning just to smile at the departing pilgrims ad wish "¡Buen Camino!" and help them make a photo with the "Santiago 790km" board.

Once I saved the life of several pilgrims from a spider. Though it was sitting seemingly frightened on my hand all of us knew that it is ready to throw to our throat and bite it through. :)

On the first really sunny afternoon almost all of the pilgrims went out to sit in the sun in shorts and T-shirts despite of the 14 degree Celsius.

It is nice that you meet the people you was walked together before again and again. I met with Gary and Kathie several times since I thought that I would not.

When I started to hate the outskirt of Burgos a local lady with a dog showed me the way to the lovely route on the other side of the river.

A had a feeling that the Camino is an essence of the whole World in a way as I meet people from different and distant countries like Canada, Corea or Japan. 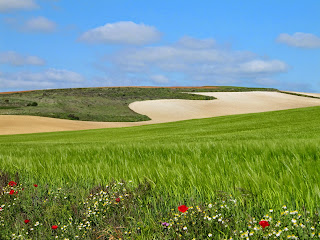 Posted by aniko.camino at 18:27 No comments:

The link below lead you to the blog of Lauren and Claudio from the US. There are beautiful pictures taken on the way.

I met Lauren and Claudio on the very first day and walked together (and together with Katie from the US and Gary from England) almost 4 days but after than they decided to speed up as they have less days for the Camino. Though I bumped into them in Viana again and stayed overnight in the same albergue.

Claudio is originally from Venezuela and his Spanish knowledge is a valuable asset. :)

Where to start? Such a many things happened in a few days. Right on the second day I had a feeling if we had been walking for at least two weeks.

I was afraid of the crowd but there is no crowd though sometimes there are many-many people together. They are only many-many friendly people.

It was also interesting that people (at least the ones I met) tend to use the "traditional" way of communication. I mean if they searched for somebody they just meet they do not use mobile phone but ask the other pilgrims. They even not change telephone number or e-mail address only when they say good-bye.

Today I said good-bye to the company I was walking with from the beginning, as we had different time-frames, speed and sphere of interest. It is somehow sad to let friends go but this happens without Camino as well.

Indeed Gary from England said good-bye to us yesterday as he felt like to stay in a really nice and tempting:) albergue in Puente la Reina. And since them it has happened more then once that we prepared with 5 chairs by eating though only 4 of us remained. He remained belonging to the group. :)

The landscape is really picturesque: lush green field of grains framed by bright yellow rapes, happy-red poppys, shy-pale-purple tiny thimes and many other type of flowers, vineyard, olive plantations, scattered tiny cosy villages with special atmosphere caused both by the style of buildings and the friendly, smiling inhabitants.

Paris is beautiful and big and totally empty early in the morning (ie. before 11 am :)).
So I succeed to visit the Notre-Dame with bearable crowd. I cannot state the same regarding the Eiffel-tower or Sacre-Couer. But fortunately the crowd is concentrated around the sights, and the rest of the city remained agreeably empty and cosy. 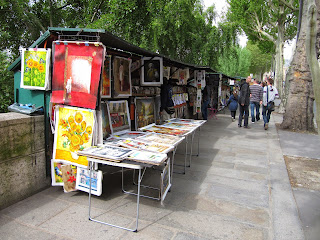 Posted by aniko.camino at 20:33 No comments:

El camino. The way. The ancient pilgrim route running through the northern part of the Iberian Peninsula. Almost 800 km to go. 800 km to see, to hear, to experience, to feel. To think. An inner and outer journey.

Time after time I have met people who either had walked the Camino or just have been planning it. They were driven by various reasons including the spiritual and/or the physical challenge.

I considered Camino to be an appealing experience but till this year I did not think that I would do it in the near future. I simply begrudged the time for.

But this February all of a sudden I decided to go. To go this spring / early summer. Thus I do not have too much time to prepare. But this is the moment when I have both motivation and chance to go so I simply cannot miss the opportunity.

Will set off in May.