Australia was not on my bucket list. But my friend convinced me.


Imi (my friend) is in love with Australia. He has been preparing to visit since his childhood. Eventually they (he with some of his friends) spent a month there last year and traveled the middle part of the continent ending up with visiting the most populated area and big cities like Sidney and Melbourne.


As appetite comes with eating he wanted more. This year he is visiting the remote and abandoned north-west area. Er..., did I say 'abandoned'? Indeed it is populated with 'cute' animals like poisonous snakes, gigantic spiders, scorpions, crocodiles and tiny jellyfishes that can go through the net installed against them and can kill you. Appealing, isn't it? Well, for me it is. I was always attracted by remote areas fare from the hordes of tourists and where the trace of human being is almost invisible.

So I joined the adventure to travel from Darwin to Perth in 16 days. A distance and places of interest that would worth 3 months. It will be dense...

This time Imi arrange & organise almost everything so I can lay back and enjoy the ride. ;)

With Zuzmóka we are preparing seriously as you can see in the picture.
(Zuzmóka is a plush salamander, who I usually travel with as I was warned that travelling alone might be dangerous.:)) 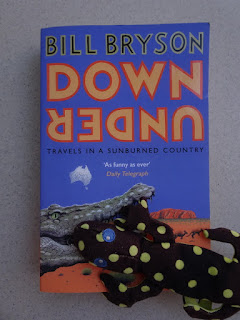