One of the most significant element of the landscape in northern and western Australia is termite mounds. I was surprised when I saw them close as there was no termite on the surface of the mounds (as opposed to the swarm of the European ants on their nest). Even where the mound was damaged and we can see the tunnels inside we cannot see any termites. So where do they live? And also lots of mounds was on flood land that is covered by water during the monsoon. Does the flood destroy the mounds made of clay? Do termites rebuild them each year?

After our return I tried to find out more about these insects. According to Wikipedia (and for my surprise) they are closer relatives of the cockroaches then ants.
As stated in https://creation.com/termite-mounds in dry season termites live underground where the temperature is almost constant. In flooded areas though they live in the mounds even in dry season. This implicitly means that somehow the water of flood does _not_ destroy the mounds though it is not explained why. Does anybody happen to know why does the termite mound survive the food? 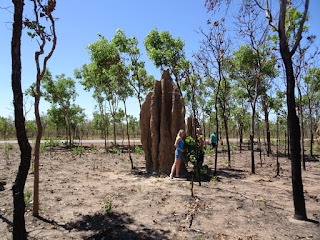