Today I made a lazy day to came over the jetlag that was not so awful that I had expected.

'Early' morning around 9 am I went for a walk in Cancun. I just felt as I would be in some dream: the everything was a bit of different: unusual trees on the street, unknown spices and vegetables in the shop. I cannot wait to meet Bet and ask about all of these mysterious:) stuff.

After that I was travelled to Valladolid. The Spanish lesson was included in the bus ticket (played a film in Spanish:)).

I do not know how did it happen but in Valladolid I bumped into a tiny but cozy chocolate museum, manufacture and 'chocoteria'. So I must taste it.:) The drink contained only chocolate bean and water. It was quite bitter but not unbearable. I just learned than the choco beans here are not fried just dried on the sun following the Mayan tradition and that results less bitter taste and more good ingredients remain in the chocolate. 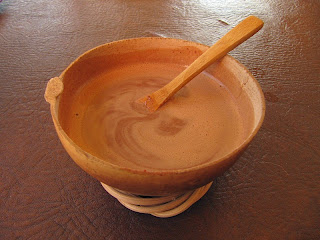 I also visited the cenote in the middle(!) of the city. Cenote is a hole created by a ceiling of a limestone cave was fallen down. There are great number of cenotes in the Yucatán peninsula.

More photos
Posted by aniko.camino at 01:34